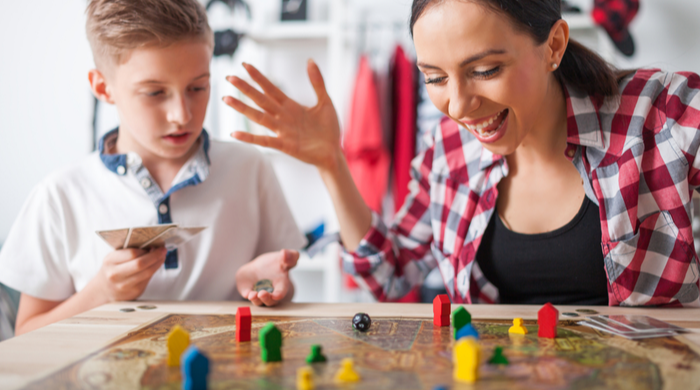 10 Tips for Teaching Youngsters How to Win and Lose Well

More youngsters are engaging in table top games, but things can get quite competitive which can at times lead to table turning tantrums!

So following are just a few ideas for those at an age where it is important to teach fair play, but also how to win and lose well.

Have a ‘fun player’ prize which either just you award or even better each player can award to others. This is about attitude not skill. Could be a Haribo bag, could be the choice of game next time, could be a sticker you decide. At the end of the game announce and clap the winner of the game first. Then have each player announce who they think the ‘fun player was and why’. Great opportunity to publicly praise and encourage your kids.

Disincentivise winning being the main thing by making the winner pack away at the end. They can however also choose what’s played next time.

“If the game is fun and without tears we will all enjoy a… (biscuit, hug, treat, screen time you choose!) afterwards.”

“If I sulk about losing i understand that once I’ve calmed down I will tidy away the game and those who don’t sulk will choose when and what we play next time.”

“Good sport play and encouragement will be tallied and the most encouraging player gets to choose what they do after the game first.”

I have told my kids (similar age) that I love playing grown up games with them. But that I play to enjoy it and if they are bad winners or losers we won’t let them play the next game. And I stick to that.

Pick games which are faster moving, don’t have a massive scoring count up at the end or which something cool has been built during the game. We love Barenpark. It does have a complicated scoring system but we encourage the kids to talk through their design for their park and ask them what their favourite bit is. We try to specifically encourage them about an aspect of the design.

With chess I’ve told the kids that I’m going to play them properly but that when they beat me, which with practice they will, I will give them a fiver. I have told them that between games I’m always happy to give tips, share ideas and give videos or books to help them learn. I’ve also encouraged them by saying that when they win they will know it’s for real.

When you see emotion rising look for a way to distract. Ask their advice, ask a question, accuse someone else of cheating!

Tell them to stop and that if they don’t you will ask them to leave the game. Once one has left, continue to do something fun with the one that didn’t cause a fuss rather than give lot of attention to the one who is causing issues.

Tell the kids that you’re going to roll the dice every time they sulk or complain. On an odd number the game is stopped instantly.

Imitate them and their crying in a comedy (non-mocking) fashion. Wait till they start laughing (hopefully) and tell them you love them and that it’s okay to be sad but also really important to celebrate people you love doing well. Have a hug.

Rachael B Active 7 months ago

Chris B Active 1 year ago

Will Leggett Active 1 year ago