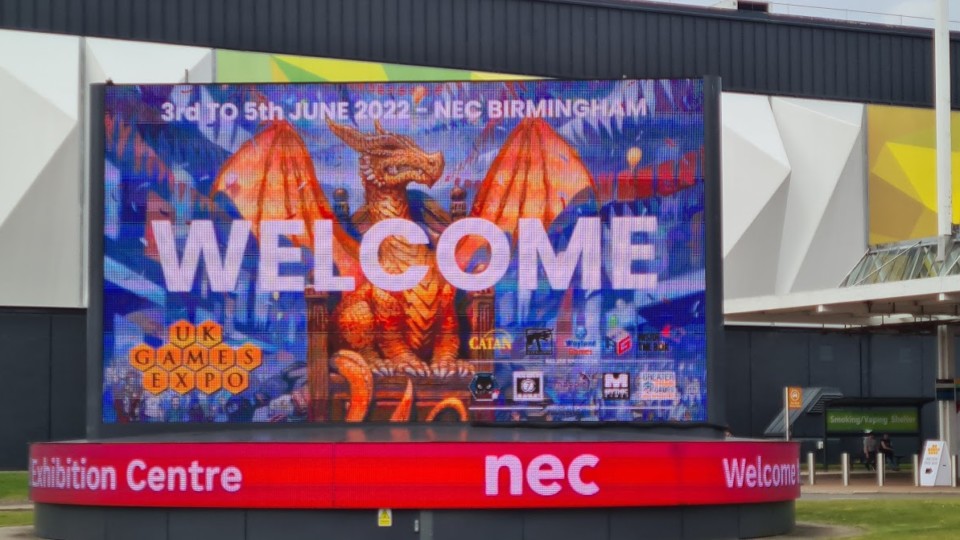 Married, 3 grown up children and enjoy playing board games. but have also dabbled in miniatures and RPG. In particular I like to play euro and strategy games, but open to having a go at anything.

If you haven’t been before it is well worth a visit and you can find out more by visiting the UKGE website.

Our first visit in 2019 was literally jaw dropping. We hadn’t heard of the expo but we found out about it as a member of a board gaming Facebook Group.

In 2021 we decided to go on a Friday as it was slightly quieter and it was easier to play some of the exhibitor games. This year the Friday was busier as it was a special bank holiday and some stalls were selling out of games later in the day.

If you are planning a visit then it is worth booking ahead, securing your parking and if you are taking the family it is worth taking food with you as it is reasonably pricey onsite.

If you like gaming, you will love UKGE and here are 3 reasons that we think it is worth a try:

Quite often game publishers will release new games at the show and so you get the opportunity to try before you buy. I first played Tinners Trail at the expo and on that basis decided to buy it. I think being able to sit down and play a game is great to get a feel for it and you can also see the buzz around stands where games are going down well.

As you wander around the hall you will probably come across some games that would otherwise not hit your radar. I have picked up several surprises at the different shows such as Museum, Res Arcana, Equinox and Embarcadero, all of which I picked up at a show.

You will definitely meet game publishers at the event who are ready to share stories and happy to chat about their games. We have also met designers at the show and got signed copies of games as a result. You can find out about what’s coming next and there are often good deals, exclusive to the show, to be had.

I know. You can buy games anytime. Isn’t it frustrating when people show off their ‘hoards’ in Facebook groups. Yes, to some extent, but as well as being able to buy games before they hit retail (Akropolis – Hatchette Board Games) you also get some really good discounts. And if you try before you buy, you also don’t suffer from buyers remorse.

There is so much more to see and do at the expo. Some people will book into the hotel and spend the whole weekend. They have shows, a range of tabletop game stands from board games and RPG to Warhammer, 40K and everything in between. There is also a hall for playtesting games in the making and competitions to see how good you really are perhaps at Catan.

If you haven’t been it is a good day out, allowing you a day to soak up the hobby and wallow in what some consider a board gamers paradise.

Rachael B Active 7 months ago

Chris B Active 1 year ago

Will Leggett Active 1 year ago